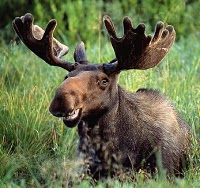 Once upon a time, a mild-mannered moose named Morris

met a wickedly witty walrus named Wanabelle.
Morris thought right off that Wannabelle had a wonderful way with words and that her whiskers, while wacky and wiry, were wistfully welcoming as well. Wannabelle was moved by Morris' manners and his marvelous, magnetic charm, not to mention the massive mantlepiece he masqueraded upon his head.
It was love at first sight, and soon the mild-mannered moose and the witty walrus named Wannabelle were wed in the church down the way. Within sixty weeks, Morris and Wannabelle welcomed into the world a wee little weeble who made their love complete, and hence ~ the first Alascattalo was born.
~
Alascattalo Day is celebrated on November 21st every year. It is a day to honor humor in general and Alaskan humor in particular. The day is named after it's mascot, the Alascattalo, a genetic cross between a walrus and a moose.
Steven C. Levi, a commercial writer who works in Anchorage Alaska is the originator of the Alascattalo Day Parade. He describes it as "the longest running shortest parade in American history." The parade runs one block in an alley behind Club Paris. It has been held every year for the past 25 years with an award being given for the smallest and ugliest float (must be both to win). Mr. Levi even went as far as to have an asteroid named after the Alascattalo.
So, on any other given day of the year, you may not be too thrilled about running into a moose/walrus creature in the middle of a dark alley, but on Alascattalo Day it would be wrong and weirdly worrisome it you didn't. Have a wonderful Alascattalo Day.
Sources: cim.ou.edu
events.ktva.com
Posted by Lisa