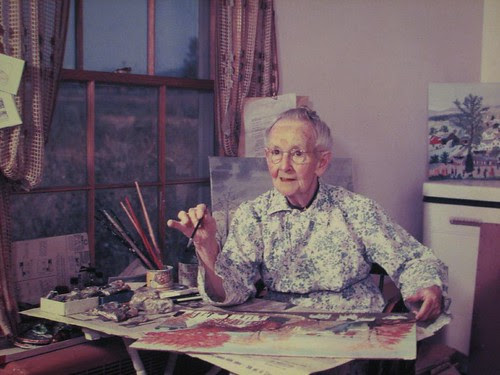 "Grandma Moses" was unique and inspirational in that she did not begin her painting career or become a famous artist until she was in her late 70's. Her American Folk Art/"Primitive" style paintings of quaint farms, villages, and countrysides evoke comforting, "down home" feelings and are loved and prized by many. Her cheerful, unassuming, and at times "spunky" ways endeared her to all.

Childhood History
Anna Mary Robertson was born on September 7, 1860, in Greewich, New York. She was the third of ten children born to Russell King Robertson and Margaret Shanahan. Anna Mary grew up on a farm where she and her siblings were taught the virtues of hard work. Despite times of tragedy and sadness, such as the burning of her father's mill and illnesses which took the lives of two of her brothers and one sister before adulthood, Anna Mary spoke of her childhood as a happy time, she said, "Those were my happy days, free from care or worry; helping mother... sporting with my brothers, making rafts to float over the mill pond, roaming the wild woods, gathering flowers, and building air castles."

As a child, Anna Mary loved to draw. Her father, who loved to see his children's drawings, would procure large sheets of blank newspaper upon which they could draw. Anna Mary attended school sporadically and only in the warmer months of the year, as she did not have sufficient warm clothing for the winter months. At age twelve, Anna Mary went to work at a neighboring farm as a "hired girl". She continued this type of work into adulthood, when in 1887, she met and married a farm worker named Thomas S. Moses.

Family Life
Soon after their wedding, Thomas and Anna Mary Moses boarded a train for North Carolina where Thomas had secured a job as the manager of a horse ranch. On the way to North Carolina, the couple stopped in Staunton, Virginia to sleep for the night. While there, they were convinced to take over as tenants for a local farm. Anna Mary loved the beautiful Shenandoah Valley of Virginia. While in Virginia, Anna Mary gave birth to ten children, five of which died in infancy. Thomas and Anna Mary worked hard to earn enough money to buy their own farm. Anna Mary bought a cow and churned butter to sell. Later, when times got hard, she made and sold potato chips to help the family get by. Eventually, the couple was able to buy their own farm in Virginia.

In 1905, Thomas, who was feeling homesick for New York, persuaded Anna Mary to leave her beautiful Virginia home, and they returned to buy a farm in Eagle Bridge, New York, not far from Anna Mary's birthplace. They named the farm "Mount Nebo" after the biblical mountain where the prophet Moses disappeared. In 1927, Thomas Moses died of a heart attack. Anna Mary continued on at the farm. With the help of her son and his wife, Anna Mary continued to work the farm until 1932, when she left the farm to care for her daughter Anna, who had contracted tuberculosis.

A Hobby Rekindled
As a young mother in Virginia, Anna Mary used her creative abilities to beautify her home. Her earliest known painting was done on a fireboard in her Virginia home. While doing a bit of wallpapering, Anna Mary did not have quite enough paper to cover the fireboard (a piece of wood that people used to cover their fireplace during summer months) so she decided to paint a landscape on it. The fireboard now hangs in the Bennington Museum in Bennington, Vermont.

At one point, Anna Mary's daughter, Anna, showed her mother an embroidered picture and asked if she could duplicate it. Anna Mary did, and with that she had a new found hobby. She embroidered pictures and gave them away as gifts to family and friends, but as the years progressed, Anna Mary's hands began to develop arthritis and she could no longer grasp the needle comfortably. Her sister, Celestia, suggested she work on developing her gift for painting to replace needle working, so Anna Mary did.

Anna Mary drew inspiration from Currier and Ives prints and illustrated books, but mostly from memories of her own life experiences. As a child, she and her brothers and sisters would go for long walks with their father. Anna Mary learned to be very observant of nature and the world around her. When she painted she would close her eyes, remember, and imagine how things used to be. She would paint pictures of farm scenes and activities of rural life such as maple sugaring, apple butter making, candle making, and haying. She was able to capture the beauty and excitement of winter's first snow, the joy of a Christmas feast, and the cheerfulness of a county fair. Anna Mary said she would sit quietly, think and remember, "Then I'll get an inspiration and start painting; then I'll forget everything, everything except how things used to be and how to paint it so people will know how we used to live."

A Star is Born
Anna Mary began to give her paintings away as gifts to friends, family, the postman, anyone and everyone. She also decided to try to sell them in the Hoosick Falls drugstore at the price of $2.00 for small paintings and $3.00 for large. One day, in 1938, a man by the name of Louis J. Caldor, a New York engineer and art collector, drove through Hoosick Falls and saw several of Anna Mary's paintings in the drugstore window. He went inside, purchased all of the paintings, and inquired about the artist. Upon learning where Anna Mary lived, Mr. Caldor went to her home and purchased ten more of her paintings. Caldor told Anna Mary that one day she would be famous, a sentiment that she could hardly believe. Anna Mary was 78 years old.

Mr. Caldor began showing Anna Mary's paintings to galleries and museums, but even those who were interested in her work quickly lost interest when they heard her age. At 78 years old, it may not be worth it to them to put time and expense into an artist who may not be around much longer. In 1939 though, Louis Caldor was able to get three of Anna Mary's paintings into an exhibition of "Contemporary Unknown American Painters" at the Museum of Modern Art in New York City. In 1940, Anna Mary's first solo exhibition entitled, "What a Farm Wife Painted", was showcased at Galerie St. Etienne in New York City, and from there, she was on a roll. She began to be featured in gallery showings across the U.S. and other countries. Her highly sought after paintings were reproduced into posters, greeting cards, china plates, and drapery fabrics, and her popularity began to grow as people learned of the "rags to riches" story of the petite 80 year old woman whose charming, homespun paintings rocketed her into worldwide fame.

Over the years, from the time that Anna Mary's children were young and began to grow, her neighbors lovingly referred to her as "Mother Moses". Once she became famous, the press christened her with the name of "Grandma Moses", and that is how she became to be known around the world.

Grandma Moses lived to be 101 years old. On her 100th birthday, Governor Rockefeller proclaimed her birthday as "Grandma Moses Day". In her three decades of painting, "Grandma Moses" painted more than 1600 paintings. Her work was cherished and admired by many, as she herself was among all who knew her. As a friend of Norman Rockwell, she can be found on the left side of his painting, "Christmas Homecoming". Grandma Moses died on December 13, 1961, in Hoosick Falls, New York.

In her autobiography, "My Life's History", Grandma Moses wrote, "I look back on my life like a good day's work, it was done and I feel satisfied with it. I was happy and contented, I knew nothing better and made the best out of what life offered. And life is what we make it, always has been, always will be."

To learn even more great stuff about Grandma Moses and her paintings click on my sources below.